02. Did you keep your new years' resolutions, and will you make more for next year?
I did try to get on top of my overdraft, and I did, sort of, all the way up until December when I spunked my entire pay up the wall on presents for various beloveds and it's looking like my finances are in the shitter again for 2k15 (yolo).

03. Did someone close to you give birth?
No, but a friend of a friend did, and I didn't want to hold the baby because it was creepily small and called Harris and sorry but that is a future serial killer name

04. Did anyone close to you die?
No, thankfully. I did constantly dread it happening to the extent that if a text goes unanswered for half an hour I assume the intended recipient is dead in a ditch. That's normal, right?

05. What countries did you visit?
France (summer hols) and Poland (aforementioned work trip).

06. What would you like to have in 2015 that you lacked in 2014?
A new job. Failing that, a better salary. A little bit more basic self discipline.

07. What date(s) from 2014 will remain etched upon your memory, and why?
18th April, the day I moved into a shabbier but infinitely more comfortable flat
29th September, the river-swimming boat-stealing excursion I mention below
1st December, when I had a really nice day out with my mum buying lipstick and looking at Christmas stuff in Tesco Home Plus

08.What was your biggest achievement(s) of the year?
Despite my grumbling here (there's just no other outlet for it), I'm IN FACT very content and constantly feel lucky and hashtag blessed. As a negative wee bitch, recognising this has sort of been an achievement. Also, I made dresses!

09. What was your biggest failure(s)?
General flakiness and allowing various weirdo anxieties to get the better of me (fear of loose and uneven paving stones has ruined Edinburgh city centre for me tbh)

10. Did you suffer illness or injury?
Nothing too bad or specific. I did get this virus where the only symptom was constantly needing to clear my throat, which was annoying for anyone sitting near me.

11. What was the best thing you bought?
Big green coat with fur trim. Yellow rucksack.

12.Whose behavior merited celebration?
Anyone who put up with my shit

13. Whose behavior made you appalled and depressed?
Online misogynists

14. Where did most of your money go?
Taxis and takeaways. Also bills etc.

16. What song(s) will always remind you of 2014?
The Strokes - Heart in a Cage. And this badass bluegrassy Punch Brothers cover of same:


17. Compared to this time last year, are you
i. Happier or sadder? About the same
ii. Thinner or fatter? Same
iii. Richer or poorer? Richer, marginally

18. What do you wish you'd done more of? Writing, making stuff

19. What do you wish you'd done less of?
Avoiding people

20. How did you spend Christmas?
Olympic-standard drink-and-eatathon with my family.

23.What was your favorite TV program?
OITNB. GoT. The Fall.

24. Do you hate anyone now that you didn't hate this time last year?
Nah.

25.What were the best book[s] you read?
LANARK
I also reread a bunch of depresso Thomas Hardy (Tess, Jude, etc) and it killed me.

26. What was your greatest musical discovery?
This 1930s Japanese track:


27. What did you want and get?
To hang on to all the things I am lucky to have. Also, I got promoted, which I sort of wanted in that "it would be nice but probably won't happen" way.

28. What did you want and not get?
God I think we've been over this it's embarrassing

29.Favorite film[s] of this year?
I just watched "The Babadook" and "In A World" in the last couple of days, and loved them both. Can't remember any other films I watched.

30. What did you do on your birthday, and how old were you?
I turned 28 and went to Wagamama. I look a long weekend the day after and spent a day driving about the bleak Lammermuirs, stopping to swim in a river, poke around in an hold church, steal a boat (again). It was nice.

31. What one thing would have made your year immeasurably more satisfying?
Being more arsed to do stuff, like see people, and maybe have more sex instead of just falling asleep in front of Derren Brown repeats.

32. How would you describe your personal fashion concept in 2013?
Slapdash rockabilly with a practical rucksack.

33.What kept you sane?
Bitchy whatsapp exchanges with my brother
Driving about Leith with Becky screeching about ~TMI topics
Not being alone too much of the time

34. Which celebrity/public figure did you fancy the most?
n/a, nobody is hot anymore.

35. What political issue stirred you the most?
The indyref for sure. I went from ambivalent to a big fat Yes. Spent the day after crying into whisky after a day of keeping my mouth shut in an office full of No voters next door to Bute House.

36. Who did you miss?
All absent friends.

37. Who was the best new person you met?
I made quite good pals with Ross, a guy who started at my work in April and then was turfed out after the end of his probation period (unceremoniously, in the middle of a random Friday morning). Anyone I really see eye to eye with at work always gets fucking fired.

38. Tell us a valuable life lesson you learned in 2014:
Don't stockpile things to sell on eBay, because you won't be arsed. Just get rid.

I wasn't late for work today because I accidentally muted the ringer on my phone (and, by extension, my alarm). I was late for work because I spent way too long curled up in bed clutching a stuffed rabbit, eyes screwed shut, denying all my responsibilities-- not that they are particularly numerous. When I finally got up, I spent half an hour adding a wonky red ribbon trim to the absurd dress I just made, and then I had toast, and then decided it was also a blow-dry day. Then I got a taxi to work. Like I have every day this week. Except for Monday, when Jim gave me a lift. I can't afford this, but I refuse to learn to manage my time properly outside of work. I'm way too organised at work so doing things properly when I'm not there doesn't really feel like a break.

I really miss this forsaken place.

I need daylight to function.

So it turns out that I'm not a very nice person. Pressure's off, let's party!

I'm destined for great things, I know it

WHAT I WAS SUPPOSED TO DO TODAY: get up and go out and hunt for jobs and (at the very least) sign on and go to the bank

WHAT I ACTUALLY DID TODAY: sat at my computer eating ginger nuts and reading about two weeks of ontd backlog and cluttering up my desktop with Roger Federer-related gifs

This weekend, I'm going down to the Lake District for some kind of extended family get together and I'm hoping that it'll be like a play, full of tension and subtext and stuff: cat on a damp slate roof. Something to look foward to?

OH and btw, here are some pictures of my newly-tidied, newly-moved-back-into room at home.

Haha, you know that you're awesome when you google a word to see if it exists and you find that its only occurrence is in a forum post from 2003, WRITTEN BY YOU.

1. What were some of the smells and tastes of your childhood? 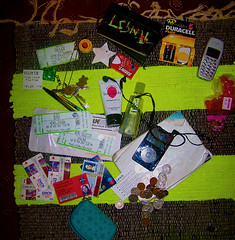 The Contents of My Bag
Originally uploaded by Too Lazy For Words
I had about twenty better and more pressing things to do, so I decided to take a picture of all the shit in my bag and then annotate it on Flickr. Hooray! Do take a look. God, I'm such an exhibitionist. Next: pictures of my tits recently reärranged bedroom.

These are all the different colours and textures of water I've seen this summer. Quite a lot of it isn't from the Firth of Forth, which means that I've actually been out of Scotland, which in turn makes me slightly less of a loser-- and much more of a debtor to NatWest-- than I was around this time last year. Don't wet your pants yet, though; I haven't been further afield than Weston-Super-Mare (planned) and Cambridge (impulsive).

Now, I am mostly opposed to highlights of any kind. The highlights recording of the Phantom of the Opera, for example, cuts out "Stranger Than You Dreamt It", the sly, bittersweet crux of the show, and the Les Misérables highlights forget "A Little Fall of Rain", the only part of the show in which Marius is not a stupid dick. Still, they do have their place, especially when owning a complete recording would seem gratuitous and obsessive. And to bore you with my obsessiveness as I recount every moment of my wonderful summer in prickly, loving detail is the last thing that I want, especially since this hasn't been the livest of journals in recent months. So here are the highlights: if you will like, ( Collapse ).

Just so there aren't any doubts, I do know how to spell "summary". What you just saw was in fact a brilliant pun.

Open to: All, detailed results viewable to: All. Participants: 27

Is it okay to use the word "immediacy" twice on the same page?

When will I finish this essay? PLACE YOUR BETS NOW.

A word that annoys you:

EDIT: What, are all you losers in bed or out instead of online? Vote! Vote vote vote!